It’s a beautiful day. The kind of of day when the world spins on and you’re in the peaceful epicentre. The kind of day you run into a kindred spirit and fall in love. Actually you’d much rather fall in love with an idiot who gets under your skin and enrages you..at first at least. It’d make for an interesting life to be sure. Similarity doesn’t challenge you enough.

Love is probably the most abstract emotion ever. And anyone who’s ever seen a Romantic Comedy knows exactly what I mean when I say it’s more a commercial product and right up there with luxury goods bought for displaying wealth.
Forgive this deplorable view. I’m 18 and naive.

And then Ernest Hemingway’s words pop into my head..

The first thought that pops into my head is-‘what ****!’ I apologize for the language. But it is kinda true.

And then I felt like a complete and utter fool,because the best love story of them all resides under my roof.
My grandparents have been married for more than 65 years.

She wakes up at 6 in the morning,because he likes an early breakfast at 7.
He went to the hospital everyday when she had an accident and refused to leave without hours of assuring him that no one would leave her side. And he came back in about 2 hours after that anyway.
She always knows exactly where his things are,even when he has no recollection of leaving them lying around.
He brings her roses from the terrace garden when they’re in full bloom.

It’s the story after ‘The End.’ has flashed on the screen and you assume the happily ever after.

And it makes me feel amazing to have grown up with this example of what I’d call True Love.
It’s friendship and patience and understanding and so much more.
I can’t even put it into words. It’s a beautiful thing.

Unfortunately,anyone living around  here would willingly attest to the fact that this beautiful expression exists only on this side of the house door. The other side is a world of idiots who thrive on Drama and have probably declared love more times than the number of years they’ve been living.

So I’m gonna ignore them for a while. Them and their distorted image of love which includes a new romance every other month.
And I’m gonna smile.
Cause it’s a beautiful day. And my dog’s asleep on my lap. And my grandparents are right here. That’s love enough for me.

This post could not possibly be more coincidental. My topic? Do you have animals in your life? If yes,what do they mean to you. You find it here.
And yesterday my beloved Elsa turned three years old.

She is my heart,my soul. I’ve had her since was a puppy that fit in my lap and chewed up everything she could get her teeth on.

Like this. I’ve grown so attached to this little girl I can’t even put it in words. Anyone who’s ever had a dog or loves them knows that sense of complete satisfaction you get when they jump on you everyday when you return home,their insistence that your sole purpose in life is to hug them,play with them and cuddle up together. So what does she mean to me? She means unconditional,irrepressible,flawless love. I also used to have a cat. 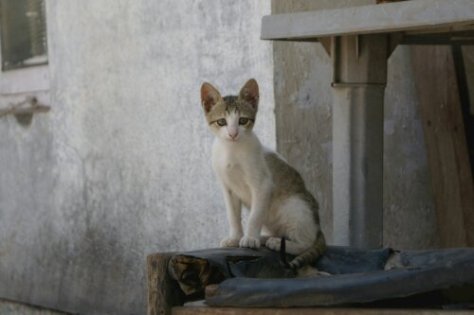 Ladies and Gentlemen,Meet Chips the cat.

I adopted him when he was a kitten small enough to fit in the palm of my hand. I remember when I first got him home and introduced him to Elsa,who was about a year old at the time. Yeah she learnt the hard way not to mess with a spitfire of a kitten. That scratch on her nose didn’t disappear for about a fortnight! But they learnt to live together. They used to cuddle up on Elsa’s bed during the meagre excuse for a winter we have here in Bombay.

Chips,however,decided that the domestic life was not for him,he left one day and didn’t come back. Not a day goes by when I don’t miss him. It’s been more than three months that he’s been gone. 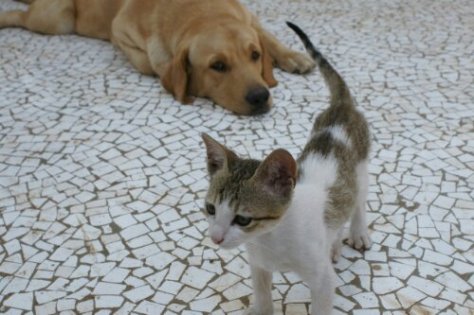 Pieces of my heart.

So that’s that. I love my Elsa and Chips. They’re my family. That says it all I think.

The Things That Be.

The days before yesterday.